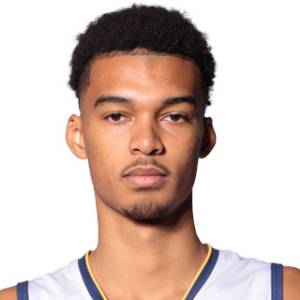 Victor Wembanyama is a basketball player born on January 04, 2004. His height is seven foot two (2m19 / 7-2). He is a center who most recently played for Boulogne-Levallois in Friendly games.

On May 04, 2021, Victor Wembanyama set his career high in assists in a Betclic Elite game. That day he dished 4 assists in Nanterre's home win against Le Portel, 76-75. He also had 7 points, 9 rebounds and 1 block.

On October 20, 2020, Victor Wembanyama set his career high in efficiency in a France - NM 1 game. That day he accomplished 32 efficiency in Pôle France's road win against Le Havre, 63-72. He also had 22 points, 10 rebounds and 2 assists.

Victor Wembanyama through the years 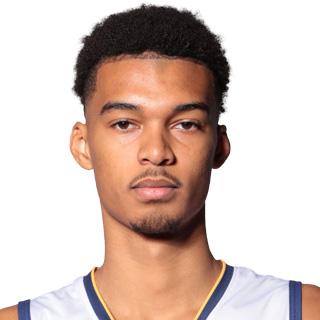 Born in 2004 and standing 7-2, Victor Wembanyama in France’s brightest prospect. He came into the spotlights in the summer of 2019, displaying exceptional mobility and unlimited potential during the U16 European Championship where France captured the silver medal and he was named to the All Tournament team.

Being 5-9 at only 10 makes it difficult to blend in. Being 7-2 at 16 and taking Europe by storm for his first international competition makes it impossible to hide. Being labelled as a potential first pick of the NBA draft is a heavy burden to carry and Victor Wembanyama’s entourage is focusing on protecting the teenager. Although French basketball has produced its share of elite players with a total of 32 players having played in the NBA as of the 2019/2020 season, it has never seen a potential like Wembanyama’s. Finding a fitting comparison is a difficult task. The name of Kristaps Porzingis often pops up in the conversation. The Latvian star is 7-3 with a remarkable combination of size, speed and shooting range. Although he recognizes some similarities, the French unicorn feels he can be different : "Maybe this is not the best example. There are some things that he doesn’t do that I hope I will be able to accomplish. It is tough to find a player I can relate to. I hope I can become a point of comparison for others in the future." What could be seen as a teenager bragging is just a reflection of an undeniable fact : Victor Wembanyama is unique.

Victor Wembanyama comes from a family of athletes. His father was in a long jump athlete who's record was 7.41 meters, and his mother was a basketball player for Stade Français. His sister, Eve Wembanyama, was born in 2001, and won a U16 European Championship with the French National Team in 2017 with Marine Fauthoux and Iliana Rupert. Wembanyama went from being 6'4 at only 11, to 6'10 at 14, and 7'2 at 15.

His development requires a special attention from his club of Nanterre. The squad has litteraly built a dedicated team around Wembanyama. "Because of his potential and his physical profile, he can’t be treated as the other young players. We set up a special organization around him", says Pascal Donnadieu, who knows him particularly well. His brother Frederic, now the club’s General Manager, was his coach when Wembanyama moved from Versailles to Nanterre after being spotted at a U11 tournament. At the time a coach from Nanterre thought Wembanyama was an assistant coach until he came into the game. Since then the teenager has played for every youth team with the club : U11, U13, U15, U18 and in the espoirs league. He even appeared in a EuroCup game when he was still 15. To be ambitious and patient in the difficult balance Nanterre has to find, as Donnadieu notices : "Victor has been with us at Nanterre for a long time and we have created around him a special organization. In the past guys like Edwin Jackson, Adrien Moerman or Evan Fournier played for us. But they were already professional players. Victor is a first. Vincent Dziagwa, our strenght and conditioning coach has a daily program for him. He also practices individually with Michael Bur, the espoirs coach, and Philippe Da Silva, our assistant coach. What makes things complicated is we have to deal with his very thin frame when he plays with men and deal with his unique set of skills when he plays with kids his age." School remains a priority as well as putting some weight on his body to prevent any serious injuries when given a chance to practice with the pro team.

During the 2018/19 season, Wembanyama, born in 2014, played with the U18 team of Nanterre, reaching the Final Four. During the 2019/20 season although he played a couple of game with his age group, he is in the rotation of the espoirs team, playing against players up to five years older. He averaged 10.2 points, 4.8 rebounds and 3.3 blocks per game in 20 minutes per game. The best shot blocker of the league, he also shot 32 three-pointers in 13 games, a reminder of his uncanny skills. "He is unique because I have never seen in my life such a combination of size and fundamentals", points out Pascal Donnadieu. "Never seen a guy so tall be able to handle and shoot the ball like he does. His ability to play outside is fantastic and you cannot make him play against his instinct, forcing him inside. It is a matter of finding the right balance. He can do things that only a point guard or a shooting guard can normally do. And he loves it. We have to restrain him from time to time because he is going to try and throw these no look passes in the middle of the break."

In the summer of 2019, in Udine, Italy, Wembanyama impressed all the scouts because of his defensive impact at the U16 European Championship. France reached the final with his center being named to the All Tournament Team. His 7 blocked shots against Serbia or his 21 rebounds and 8 blocks versus Croatia, his speed, agility and timing were deadly weapons for France. A defensive masterpiece that was not expected neither from the player nor from the coaching staff. "I have always blocked shot because of my size. But never because I could read the game and read plays. It has become a thrill now." In fact, the first games played by Wembanyama early in the year with the U16 national team were far from convincing. So much so that coach Bernard Faure wondered if he was going to take his giant to Italy. "I have to confess this thought crossed my mind. When he joined the U16 national team a year earlier he struggled. His first games were disappointing because I feel he had not grasped what it took in terms of intensity to earn his spot on the roster. Right away we told him that despite his potential he had to earn his minutes everyday at practice. He was not ready for this kind of speech. We were tougher with him than with anybody else, more demanding. That period was an eye opener for him. He used to play for fun, trying difficult and unecessary moves. When he came back he was different and we could tell from the start of training camp. He wanted to make it to the European Championship. He understood he had to show something different. He got better and better with time and we were surprised by his ability to raise his game as the competition got better."

While FC Barcelona had already its eyes on the prized prospect, who played the Mini Copa Endesa with the prestigious Spanish side in February 2018, scouts from around the world suddenly realized how promising he could be and ESPN did a feature about him. Yet and as surprising as it might sound, Wembanyama feels like those who found out about him at the U16 European Championship had only seen 50% of his game. "Victor will try to make crazy passes from time to time. Stuff that no one has seen. Sometimes it works, sometimes it doesn’t. But he is a unique player and you have to give him some freedom", says coach Michael Bur. "He s not an inside player. He is not an outside player. So when coaching him, you always have to come up with new ideas and new challenges. Because he is a very quick learner. And most importantly, he loves basketball.

Despite all of the attention around him and the perspective of becoming an NBA millionaire rather sooner than later, Wembanyama is keeping it real in the familiar surrounding of Nanterre. "My brother Frederic was his first coach in the club in the U11 category. He remains very close to his parents and he is the one who handles all the requests around Victor. His parents are doing a great job of keeping him grounded. And despite all the hype, Victor has remained himself. He still has this great joy just to play ball. And for a 16 years old it is essential to keep this enthusiasm", says Pascal Donnadieu who, nonetheless has great expectations for the younster. "Success for him would be to have a long NBA career. And be the leader of the national team. The 2024 Olympic Games will be in Paris. I know it is early and he will only be 20. It might sound crazy but nothing is with Victor."