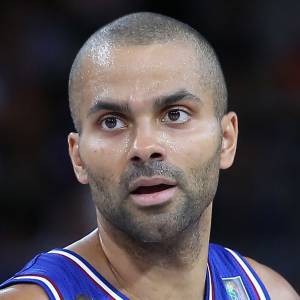 Tony Parker is a basketball player born on May 17, 1982 in Bruges (Belgique). His height is six foot one (1m86 / 6-1). He is a point guard who most recently played for Charlotte Hornets in NBA.

On November 05, 2008, Tony Parker set his career high in efficiency in a NBA game. That day he accomplished 53 efficiency in San Antonio's road win against Minnesota, 125-129. He also had 55 points, 7 rebounds and 10 assists.

Tony Parker through the years

The story could have been a lot different if it was not for the imagination of a then 24-year-old scout for the San Antonio Spurs. In 2001, Tony Parker was a lightning-quick but skinny point guard for Paris Basket Racing in the French League. Of course, he had stolen the show at the Hoop Summit a year earlier but the mighty Spurs, looking for a backup point guard, were not sold on the Frenchman. And after his first workout in Chicago, his name was definitely off the list. "I was terrible", summed up Parker. But Sam Presti, today’s GM for the Oklahoma City Thunder, kept coming back at RC Buford with a bag full of VHS tapes, asking him to reconsider his position and convince coach Gregg Popovich to offer him a second workout. It happened in San Antonio. Parker did not let that opportunity pass by. And the rest is history: 18 years in the NBA, 4 championships, 1 NBA Finals MVP trophy and 6 All-Star Game selection.

A winner from a young age

The son of an American pro basketball player, Tony Parker was born in Belgium but grew up in France. He quickly became a regular feature on youth national teams playing in his first European Championship at the U16 level in 1997, before joining the INSEP, a training academy in Paris, where he teamed up with future NBA players Boris Diaw and Ronny Turiaf. Together, they won the U18 European Championship in 2000. Parker had already launched his professional career but played only two seasons in France’s first division before the Spurs drafted him with the 28th pick in 2001. This win is regarded by many as the start of a new dawn for French basketball. Not only did that U18 squad produced five NBA players (Parker, Diaw, Turiaf, Mickael Pietrus, Yakhouba Diawara) it also changed mentalities as winning championships and aiming at doing so became a clear cut ambition for the French teams that follow.

That confidence was Tony Parker’s main asset when he joined the San Antonio Spurs and their dominant inside duo of David Robinson and Tim Duncan. The team had won 58 games before being swept in the Conference Finals by the Lakers. It took Parker only five games to move into the starting lineup of this championship contender. On November 6, 2001, at home against Orlando, he became the youngest starter in NBA history. A bold move from coach Gregg Popovich who Parker described as an unbelievable second dad when he retired. A dad so caring off the court but also so demanding on it: "My first three years I could never make him happy. It was just constant, constant, constant almost like abuse", acknowledged Parker in a Sports Illustrated story.

Just five months prior, Popovich was not convinced after watching him be pushed around by team scout and former pro player Lance Blanks during his first NBA workout. And despite handing him the reins of the franchise, he did not cut any slack to his point guard. "He was the hardest coached individual I have seen in this entire program. Through every film, every game, he accepted every bit of it", said Tim Duncan. "I was really hard on him because I wanted to know real quick if he had that mental toughness to go play and be in this league with people, so I threw him in the frying pan and was all over him at both ends of the court to see how he would handle it", explained Popovich. As the San Antonio Express-News wrote in 2015, Parker would drive home with tears in his eyes, confessing to friends: "I don’t even know if I can make that man happy."

He did though, with patience and toughness. The same ingredients he used to win over superstar Tim Duncan. "The story he tells is that I did not speak to him during his first year with the team. I won’t confirm nor deny that", Duncan joked during Parker’s retirement ceremony. "I had no idea this kid would be the point guard I’d love to play with for the rest of my career." Ironically the player Parker replaced in the starting lineup was Antonio Daniels, Duncan’s best friend on the squad. With the addition of Manu Ginobili a year later, the Big Three was born and made the Spurs one of the most dominant franchises in the history of the NBA. From 2002 through 2016, they won 575 regular-season games and 126 post-season games, winning four championships along the way.

The first one came in 2003 against the New Jersey Nets. After being stellar for the first three games, Parker struggled for the next three but his backup Speedy Claxton came to the rescue. That summer the Spurs flirted with the idea to bring Jason Kidd on board to team up with their French point guard. The deal was never finalized and Parker was still at the helm when San Antonio downed the Pistons 4-3 in the 2005 Finals and swept the Cavaliers in 2007 behind Parker’s dominating display. He averaged 24.5 points per game shooting 56.8% from the field while being named MVP.

Revenge on the Heat

It then took 6 long years (based on Spurs’ standards) before he returned to the Finals. The Spurs had taken a backseat to younger, more athletic squads. The addition of Kahwi Leonard and Boris Diaw gave a necessary boost to the squad which managed to bounce back from a devastating loss in the 2013 NBA Finals as Ray Allen knocked down an iconic three-pointer after an offensive rebound while the Spurs were up 3-2 in the series and 95-92 with 6 seconds to play. A year later the two teams met again and San Antonio took a sweet revenge, winning 4-1. "To get that championship playing with my best friend is just fantastic. This is the best title of them all. Basketball can be so cruel sometimes. But also so beautiful."

Apart from his NBA career, Tony Parker frantically searched for similar success with the French National Team. He began his journey with Les Bleus in November 2000, aged only 18. It took him 13 years and many frustrating moments to finally achieve his goal. France often featured a lineup filled with NBA players but fell short. A new generation came along in the early 2010’s, led by swingman Nicolas Batum and in 2013, in Slovenia, France was crowned European Champion for the first time in its history. Parker led the way taking home MVP honors beating arch-rival Spain in the semi-finals and Lithuania in the final game. "I would not change anything from this adventure", he confessed at the time. "The ups and downs, the agonizing defeats. I won a bronze medal, a silver medal and now gold. It is even sweeter when you have to fight for it and to win it at 31, at a point where I was wondering if we could achieve it… It is the only title I was missing. Winning with the national team is my biggest achievement. From now on, no one will be able to say I never won in Europe, that you cannot win with a scoring point guard. All of this is over." Overall, Parker played in 8 European Championships with France and 2 Olympic Games. He retired as the leading scorer in EuroBasket, although Pau Gasol has since surpassed him. He ranks as the fourth leading scorer in the history of the French national team.

A quick farewell with the Hornets

In 2018, after 17 seasons with the Spurs, Parker left to join the Charlotte Hornets. During his last season in San Antonio, he had lost his starting job and suffered a quadriceps injury that limited him to 55 games. In North Carolina, Parker was reunited with a former Spurs’ assistant in coach James Borrego and with fellow Frenchman Nicolas Batum. The reunion only lasted a year though. Despite Parker claims he wanted to play 20 years in the League, he found out something was missing away from the Spurs. "At the end of the day, I was like, if I can’t be Tony Parker anymore and I can’t play for a championship, I don’t want to play basketball anymore. I play basketball to win something, and it’s been like that with the French national team when we try to compete for a gold medal or with the Spurs to win a championship. And if I don’t play for a championship, I feel like, why are we playing?"