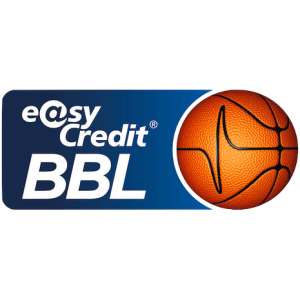 Check out the latest Germany - easyCredit BB scores and standings.

Game news from around the Germany - easyCredit BB

The Easycredit Basketball-Bundesliga has become, in the past few years, one of the most respected League in Europe in terms of organization.

The country where basketball was played in cities where US army troops were stationned, was once dominated by Leverkusen as the club captured 14 championships in the span of 28 seasons between 1969 and 1995, including seven consecutives titles between 1989 and 1995. Their dominance finally came to a close only to be replaced by another one. Alba Berlin took over, winning seven championships in a row.

The progress of the national team that unexpectedly won EuroBasket at home in 1993 and the rise of NBA superstar Dirk Nowitzki helped the sport grow in popularity. Arenas, TV production and highlights, marketing, the efforts were visible and the BBL gained in credibility and competitiveness.

The face of the League was also changed by the choice of Bayern Munich to invest once again in basketball. The football giant instantly became a basketball powerhouse and was able to attract marquee NBA players such as Derrick Williams, the second pick of the draft in 2011, or Greg Monroe, seveth pick in 2010.

The influence of US players is immense in Germany and the league had to adapt its rules as German players had a tough time showcasing their skills in the first division.

Germany BBL Rookie of the Year