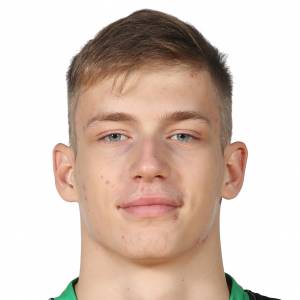 Luka Samanic is a basketball player born on January 09, 2000. His height is six foot ten (2m08 / 6-10). He is a small forward who most recently played for Westchester Knicks in G-League.

On October 21, 2018, Luka Samanic tied his career high in steals in a Slovenia - Telemach League game. That day he reached 3 steals in Petrol Olimpjia's home win against Hopsi Polzela, 98-95. He also had 13 points, 5 rebounds.

On January 28, 2020, Luka Samanic set his career high in efficiency in a G-League game. That day he accomplished 32 efficiency in Austin Spurs's road loss against Memphis Hustle, 115-111. He also had 27 points, 12 rebounds and 1 assist.

Luka Samanic through the years

His father, Marko Samanic had a solid European career of which playing Eurolague with Krka Novo Mesto in 2001-2002, Eurocup with Zadar in 2002-2003 and also playing abroad in Germany BBL with MHP Riesen Ludwigsburg (2003-2005) and a few games in France (Jeep Elite) with Bourg-en-Bresse in 2007.

Used to traveling, Luka Samanic was playing with its home club Zagreb when he signed his first professional contract with FC Barcelona. He played 22 games in the 2017-2018 season in LEB Gold, averaging 5.1 points and 2.0 rebounds in 12 minutes, alongside top European prospects as teammates: Rodions Kurucs, Arnas Velicka, Sergi Martinez, Tom Digbeu, …

Entering into the 2019 NBA Draft

Current projections show a possible first-round selection, or early selection in the second round. Its strengths are his quickness compared to his size (good offensive versatility), his defense, and his three-point shooting. His weaknesses may be his availability to create shots and his ball handling. From an overall perspective, he remains one of the top European prospect with the ability to perform at the higher level.

Luka has been selected 19th in the 2019 NBA draft by the San Antonio Spurs and will directly play in the next NBA season 2019-2020. A few days following the draft, his club Petrol Olimpjia has already reached an agreement with San Antonio for the player to be released and signed with the Spurs.